A great deal has been written about the use of emojis in the classroom but I think that they are particularly useful in the MFL classroom.  Images are often used in second language learning in order to prompt oral or written responses and at GCSE and A level students gain greater marks for expressing their opinions about various topics.  Over the years, try as I might, I have been unable to express emotions on keynote presentations or on worksheets very well. The advent of the emoji has done away with all that worry, emojis are the perfect way of tapping into the teenage zeitgeist and encouraging oral and written work expressing likes and dislikes. Here are a few ideas that I have used successfully in my classroom.  None of them are new but it’s often good to gather all ideas into one big blogpost! 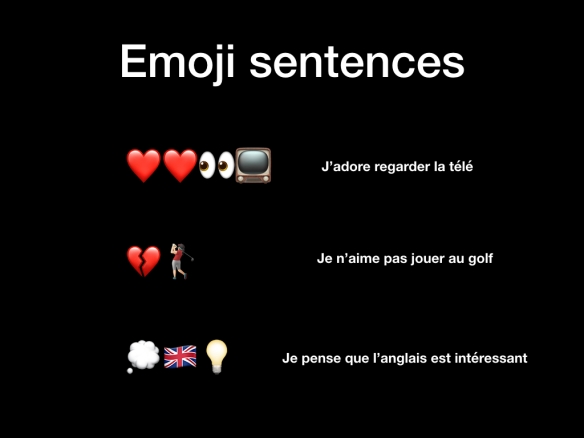 You can extend this idea and provide emoji paragraphs for example; 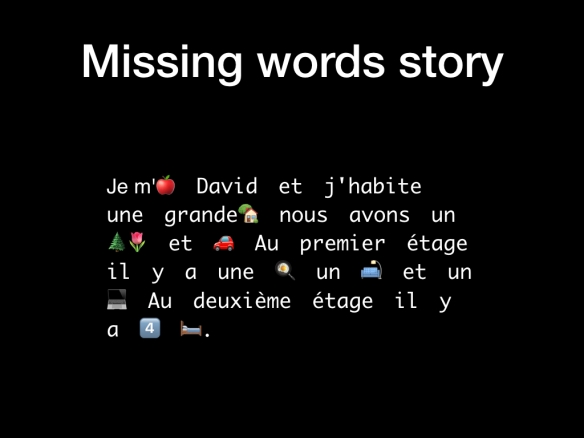 This task works well the other way around too, where the students are provided with the text and they have to add the emojis,  It’s a good way of testing understanding of vocabulary as well as providing them with longer texts to read.

Emoji bingo and emoji OXO also works well.  In bingo, provide the students with various emojis, the teacher reads out sentences in the foreign language and the students cross off the emojis when they hear a sentence which they think fits the emoji.  The catch comes at the end  when they call lotto they have to provide a suitable sentence for every emoji that they have crossed off. OXO works in a similar way but in teams.

My students also like playing a team game that we call first to the board.  Split the students into 2 teams. Students open keynote and in a new presentation choose the slide that has a large title and a subtitle. In the subtitle I get them to put their name. The teacher says a sentence in the foreign language and students type their emoji sentence into the large title box.  They then have to mirror their iPad to the main screen in the classroom.  The first student to successfully display an accurate emoji translation of the stated sentence wins a point for their team.

Apple recently released a new and rather brilliant app called Clips, its fabulous for using in the languages in classroom in many, many ways. My friend and fellow ADE Simon Pile used Clips brilliantly to create emoji ‘guess the film title’ mini films which can be seen here. This then gave me an idea about how Clips and emojis could be used in tandem in the languages classroom in a guess the sentence style mini film.  Take a look. They are really easy to make and are great for using as starters!

Emojis are also perfect to use in speaking tasks.  Try adding emojis to something like the Decide Now app or Last piece app the wheel can be spun and the student has to either use the word for the emoji in a sentence or they have to translate the emoji sentence into the foreign language.  You could even spin the wheel 3 times and the displayed emojis have to form part of a story. I also love Lucie Renard’s idea for using emojis to create guess who boards for students to play which once again, is perfect for language learning.

These are just a few ways that I use emojis in the classroom. Let me know your ideas!